ELSY-Fire systems are built with electronic control units, called nodes. The numbers of nodes are decided from the size of the system. If the system increases, extra nodes can easily be added. All the nodes have the same hardware but individual application programs. They are interconnected by a single communication cable in which all signals are transmitted. All loads, switches, sensors etc are connected directly to the nodes, without any extra relays.

Some outputs can drive loads requiring up to 20 A.

For system interface (Graphical User Interface) there are different sizes of colour displays that can be added to the ELSY-Fire system. The system interface is designed to the customer’s specifications. It can use many displays but normally there is one at the operator’s panel and sometimes one in the cabin. 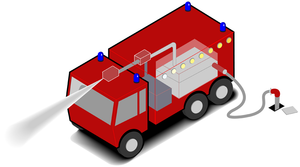